The Historical Context of Voting Rights

When we were founded as a nation, a fierce political battle erupted over who would have the vote. It was a fight over who was included in "We the People." We have been fighting that political war ever since, and continue to fight it to this day.
Bruce Hartford
Civil Rights Movement Veterans
March 21, 2015 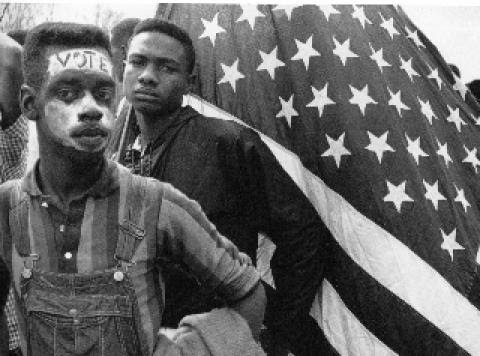 Southern African American youth demanding their basic right - the right to vote. Are we now heading backwards with GOP plans to restrict voting, as part of a new state's right campaign.
Civil Rights Movement Veterans
[Presentation given as part of a "Freedom is a Constant Struggle: Voices of the 1965 Voting Rights Struggle" panel at the San Francisco Museum of the African Diaspora, March 21st, 2015. The other panelists were SNCC field secretary Wazir Peacock, Selma student leader Charles Bonner, and voter registration worker Maria Gitin.]
The Alabama voting rights campaign of 1965 that all four of us were part of was not an isolated event. It did not spontaneously spring into existence. Rather it grew out of a long historical context, and it can only be understood within that context. We used to talk about "1st and 2nd class citizens." But today, Bob Moses of SNCC analyzes the voting rights campaigns in the framework of "We the People."
The very first words of the American Constitution are: "We the people ... do ordain and establish this Constitution for the United States of America."
It does not say: "We the states"
It does not say: "We the politicians"
It does not say: "We the 1%"
It says: "We the People."
But who are "We the People?"
Abstract political debates aside, as a matter of practical politics those who are eligible to vote - and who actually DO vote - are members of "We the People." They are what we used to refer to as "full-citizens." They are the recognized stakeholders of our society. As a matter of practical politics, those who are barred from voting are not part of "We the People."